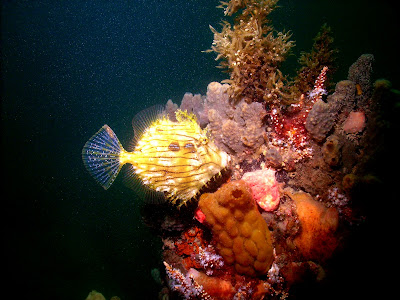 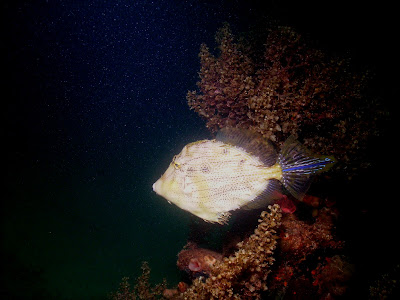 These shots were taken this afternoon on a dive at Robbs Jetty, which is a demolished old jetty with only stumps left in the sand underwater. The dive site is just south of Fremantle and is a shore dive with entry directly from the beach. Visibility was reasonable for this site, around 5 metres, and the jetty stumps are all covered in soft corals and weed.  The first shot is the Prickly Leatherjacket and it is fairly uncommon. I have only seen them on this site. The second shot is a Tasseled Filefish and is more common, however I have now discovered that they are both varieties of the same fish and both names are inter-changeable. It was interesting to observe the fish as they both seemed to change colour as we watched.
Posted by Bill at 22:21