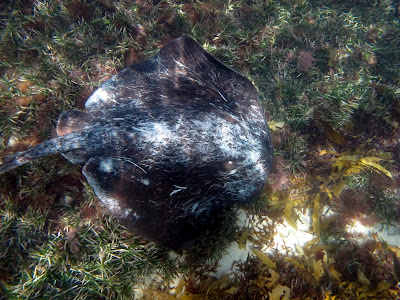 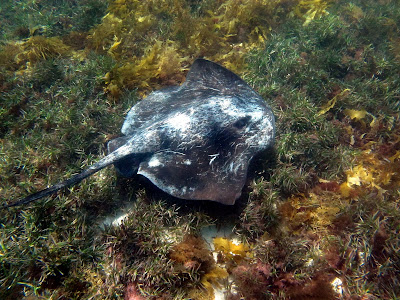 These shots were taken while I was snorkelling after a dive at Rottnest Island off the coast at Fremantle, Western Australia. The water was around 6 - 7 metres deep and the Stingray was almost two metres across. These rays can reach four metres across and weigh up to 400Kg. This one had part of the front edge of it's lower wing missing and was extremely scratched on its back. It must have had a few encounters with predators in the past - but it seemed very content now. Diving around Rottnest is fantastic with abundant fish life and a limestone reef system all around. There are numerous caves of varying size and complexity and I was diving with two friends using the bare minimum of gear and very small tanks. No wetsuits or BCD's and little weight! The dives were short but but spectacular and mostly at the west end of the island.
Posted by Bill at 10:17